<-- HI/society/5-things-know-hemorrhagic-shock/--> AIS CHANNEL - The ultimate surgical training experience! //
This site uses cookies. By continuing to browse the site you are agreeing to our use of cookies. Find out more here.
Categories
5 things you should know about Hemorrhagic Shock
Posted in Lectures on 29 May 2018 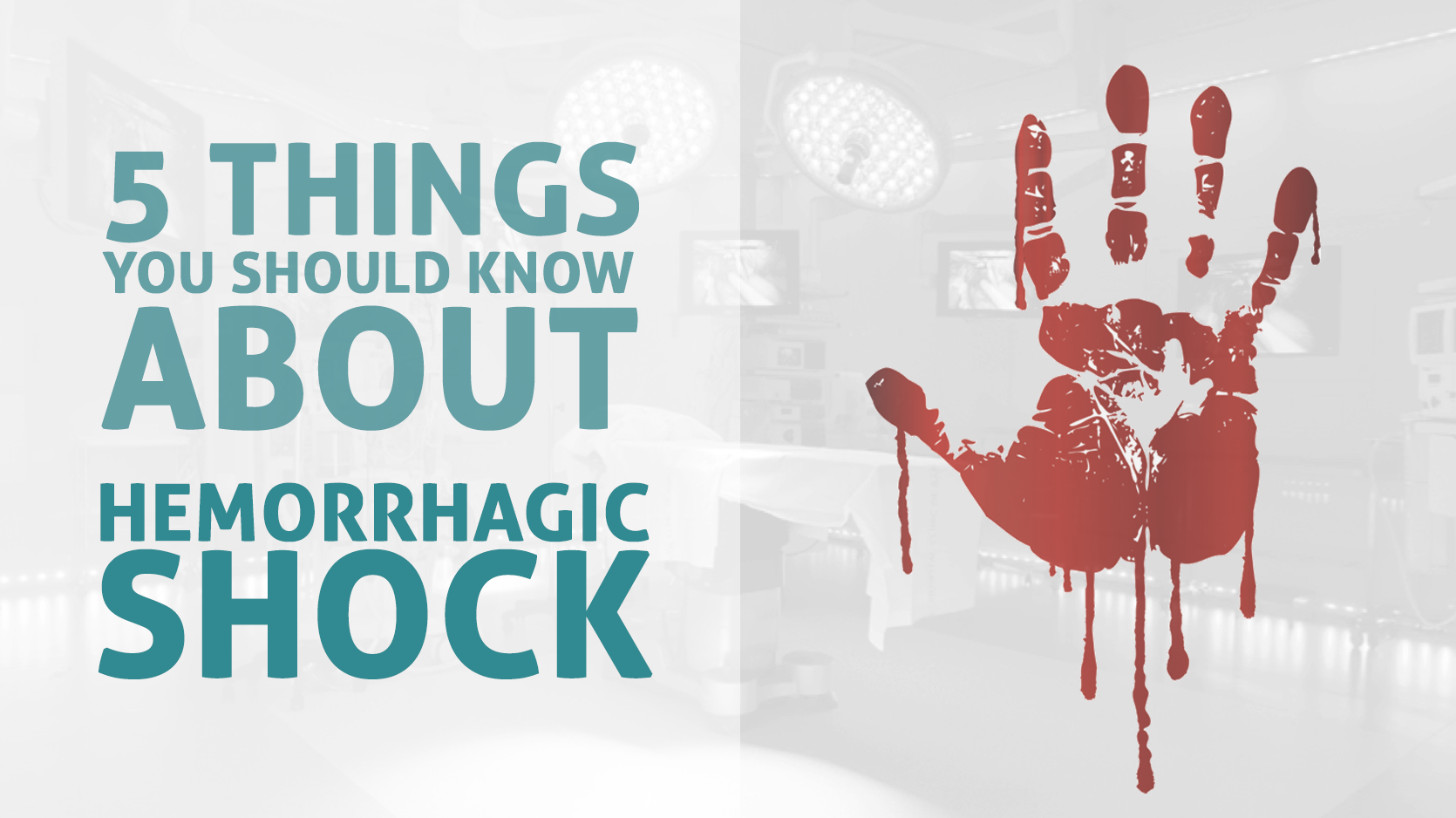 Many clinical conditions can lead to hemorrhagic shock, which is a severe blood loss that causes multiorganic failure if not treated due to a complete break of cellular homeostasis. According to the literature 1.9 million people die per year worldwide due to hemorragic shock, most of them being youngsters and correlating to 75 million years of life lost.

Despite trauma is the most frequent condition leading to hemorrhagic shock other circumstances, such as perioperative blood loss or gastrointestinal bleeding, can cause the same clinical situation.

The term “shock” and the understanding of its pathophysiology took centuries to become part of the medical knowledge.
The military history has run along with the advances in this field, helping us to understand the physiopathology behind hemorrhagic shock.

Galen, the surgeon of gladiators, believed that blood was one of the four humors that permitted the bodily functions. According to his theory bleeding was considered for many centuries as a good therapy for hemorrhage, causing an uncountable number of deaths.

Not until Andreas Vesalius corrected the Galenic anatomical model in the 16th century was this believe to change. William Harvey was the first anatomist to establish that blood was a circuit and therefore there was a steady volume of blood into the body.

The word “shock” in the English medical literature appeared for the first time as a translation of a French treatise on gunshot wounds by Henri-François LeDran. It was the translation for the French words “saisissment”, “commotion” and “coup”, the words used to describe the restless state of gunshot wounds victims.

It was believed to be a neurologic phenomenon. A detailed description of the “shock” of wounding was published in a Lancet article by the French surgeon Velpeau, as a result of his research on the field of the Paris Revolution in 1848. A “reaction” was thought to happen in the victim’s physiology to recover from this “shock”.

The American Civil War triggered new theories; vasoconstriction, hypocarbia and splacnic vasodilation were found to happen in experimentation with dogs.

World War I would be a decisive opportunity to investigate. Intravenous fluid therapy was widely used for the first time for the treatment of shock in the battlefield.

Cowell described the pre-wound factors and the primary and secondary shock.

Cannon introduced the word “exemia”, and described the hypotension and decreased tissue perfusion due to the missing blood. He also introduced an idea that would be ignored until the 21st century, which is the risk of an aggressive early fluid resuscitation resulting in a major bleeding.

We owe to Alfred Blalock the concept of “disordered blood volume” as the cause of shock. He identified 5 different settings for this condition, picturing the basic framework we use nowadays.

The adequate knowledge of the underlying pathophysiology is mandatory for a correct resuscitation in shock.

The anaerobic metabolism at a cellular level resulting from the insufficient oxygenation of the tissues provokes the release of lactic acid, inorganic phosphates and oxygen radicals. The damaged-associated molecular patterns (DAMPs) trigger the systemic response that allows the body to fight the stress back or to eventually fail if the situation is maintained long enough. The end-organ damage is the first one to appear (including the skeletal muscle, and the intraabdominal organs), whereas the brain and the myocardium are only affected in extreme hemorrhage and its damage causes a short-term fatal outcome.

The origin of this systemic response lies in the local changes seen in the endothelium at the site of injury. The endotheliopathy caused by the hemorrhage works synergistically with the coagulopathy occurring in the blood. Clotting factors can be further impaired by hypothermia and acidosis in the fatal bloody vicious circle.

Resuscitation has to be targeted to avoid this circle and to restore the coagulation state.

Hemorrhagic shock can be initially silent and affect the blood pressure only when a great loss of blood has occurred. According to the grade of blood loss hemorrhagic shock can be classified into four grades, as indicated by the American College of Surgeons Committee on Trauma. Up to 1500mL of blood can be lost without great impact in the clinical status, especially in young healthy patients. Anxiety and confusion, as well as narrowed pulse, can sometimes be the only detectable data in a bleeding patient. Nevertheless, mortality increases dramatically when resuscitation is delayed.

Rapid detection and control of hemorrhage is the priority. The concept of damage control, a military concept applied to the emergency situation of control during the sinking of a watercraft, is applied both to medical and surgical measures. It includes correction of hypothermia, direct control of bleeding (direct pressure, tourniquet or hemostatic dressings), use of massive-transfusion protocol and minimize imbalances in plasma, platelet and red-cell transfusions. The optimal ratio for trauma patients has been defined to be 1:1:1 in two prospective studies. Crystalloid infusions have to be minimized to <3 liters during the first 6 hours to avoid complications such as respiratory failure, coagulopathy and compartment syndrome.

Functional laboratory tests need to be obtained in order to guide the empirical transfusions to a targeted therapy.

Following the advanced trauma life support indications on initial resuscitation trauma patients should be less than 10 minutes in the emergency department for initial diagnosis. External bleeding should be mechanically controlled. Hemodynamically stable patients should be considered for computerized tomography (CT) exam. Patients showing hemodynamic instability should undergo a rapid evaluation to assess the location of the bleeding. Chest and pelvic simple radiographs and focused assessment with sonography for trauma (FAST) might be useful in detecting patients who should undergo an emergent laparotomy.

A damage control surgery intends to quickly solve the most threatening conditions in order to permit a successful resuscitation and further definitive surgery. It should never take more than 90 minutes and its main goals are bleeding and contamination control. Packing of solid organs, mechanic bowel resection and temporary open abdomen are sometimes necessary. A second look surgery is then mandatory when the patient’s conditions have improved after intensive care treatment.

The use of procoagulant hemostatic adjuncts, such as tranexamic acid or prothrombin complex concentrate, can be considered, particularly in patients under warfarin or with hemophilia, even though its appropriate use has not been clarified yet.

Resuscitative endovascular balloon occlusion of the aorta (REBOA) is a recently introduced technique for patients with massive bleeding as a bridge to the surgical or angiographic treatment. It is a temporary maneuver that consists on placing a flexible catheter into the aorta through the femoral artery and inflating a balloon on its tip to stop the blood flow beyond it stop the distal bleeding.