<-- HI/society/5-things-you-should-know-about-surgical-anatomy-of-the-thyroid-gland/--> AIS CHANNEL - The ultimate surgical training experience! //
This site uses cookies. By continuing to browse the site you are agreeing to our use of cookies. Find out more here.
Categories
5 Things You Should Know about Surgical Anatomy of the Thyroid Gland
Posted in Lectures on 5 May 2020
Muhammad Alshaar
MBChB, MS General Surgery
AIS Ambassador Syria 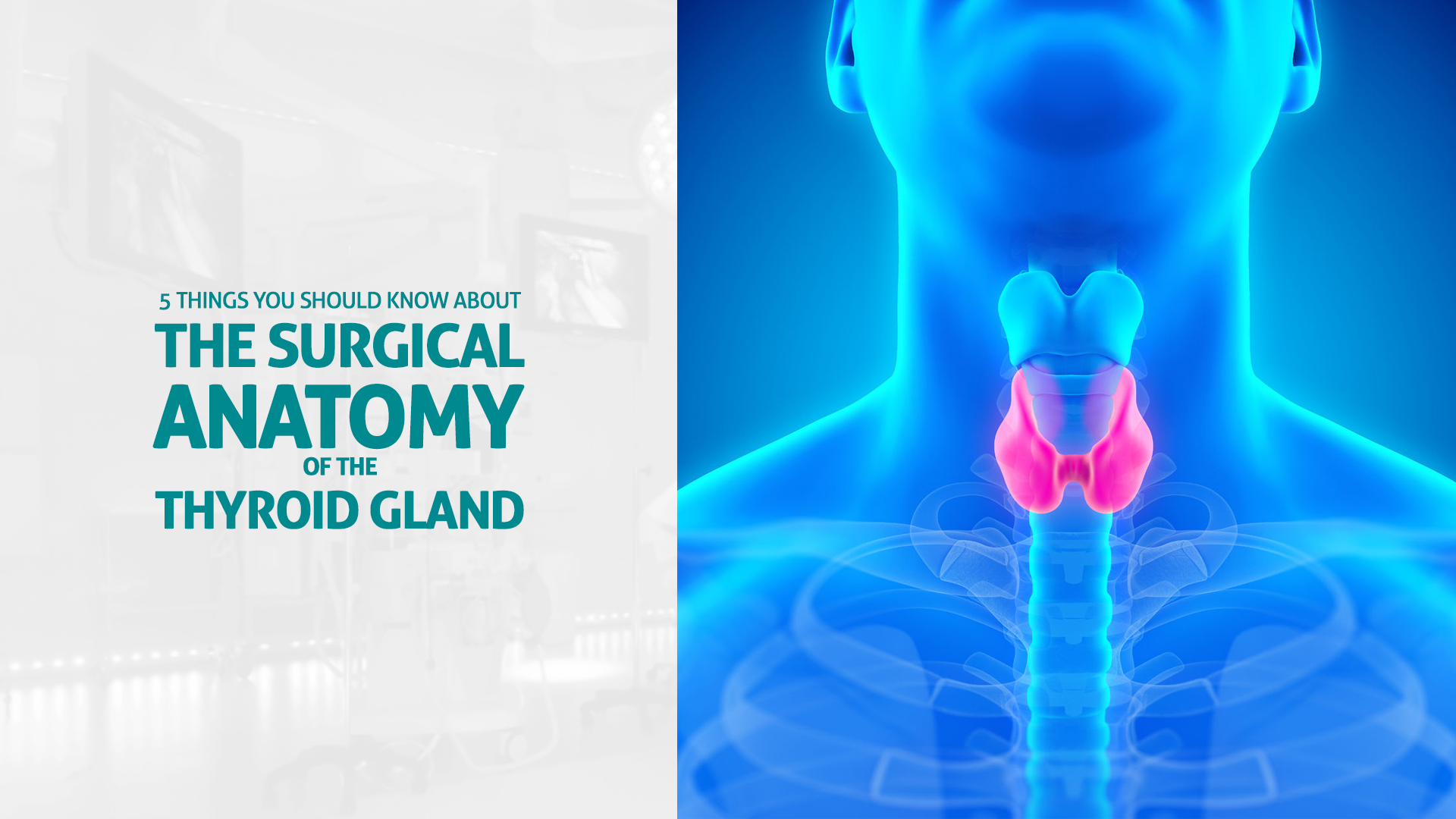 – The thyroid gland is located in front of the neck below the thyroid cartilage.
– The average weight of the thyroid gland, in healthy adults, is 15–30 g.
– It consists of two lobes connected by an isthmus in the middle.
– The pyramidal lobe, which ascends from the isthmus or the adjacent part of either lobe up to the hyoid bone, can be seen in 20 % of the patients.

The main arterial blood supplies of the thyroid gland come from:

Superior Thyroid Artery
The first branch of the external carotid artery, it enters the upper pole of the thyroid on its anterosuperior surface.

Inferior Thyroid Artery
Usually arises from the thyrocervical trunk upward in front of the vertebral artery and Longus Colli to the lower pole of the thyroid gland. Before entering the thyroid, the artery usually divides into 2–3 branches.

The inferior thyroid artery and its terminal branches are closely associated with the recurrent laryngeal nerve at the insertion of the thyroid gland, and innumerable variations have been described, so care must be taken in all cases to avoid injuring the nerve.

Thyroid IMA Artery
An unpaired artery in the anterior surface of the trachea, which can be seen in 3–10 % of patients. It usually arises from the brachiocephalic trunk (innominate artery), and occasionally it may arise from the aorta, the right common carotid, the subclavian, or the internal thoracic artery. It supplies the lower part of the thyroid gland.

Venous drainage of the Thyroid gland

– The superior and middle thyroid veins drain to the internal jugular vein.

– The left recurrent laryngeal nerve branches from the vagus nerve, and loops under the arch of the aorta. It usually ascends along the tracheoesophageal groove with a straight course.

– The right recurrent laryngeal nerve loops around the right subclavian artery. It courses more obliquely and more lateral than left.

Usually, there are four parathyroid glands, which are located on the rear surface of the thyroid gland.

The regular size of the parathyroid gland is less than 1 cm and weighs 25–40 mg.

They are yellowish-brown and may be distinguishable from the thyroid gland.

The superior parathyroid glands are normally located on the dorsal aspect of the upper pole of the thyroid gland.

The inferior parathyroid glands are usually located posteriorly to the lower pole of the thyroid but are commonly found within the thymus in the neck or upper mediastinum.

Lymphatic drainage of the Thyroid gland

In the first place, immediate lymphatic drainage is to the periglandular nodes. And it courses to the prelaryngeal (Delphian), pretracheal, and paratracheal lymph nodes.
These lymph node groups are called central lymph nodes or central neck compartment; (levels IA, IB, and VI), and they are the most common site of metastasis from thyroid cancer.
The central neck compartment boundaries are: the hyoid bone superiorly, the suprasternal notch inferiorly, and the medial border of common carotid artery laterally.