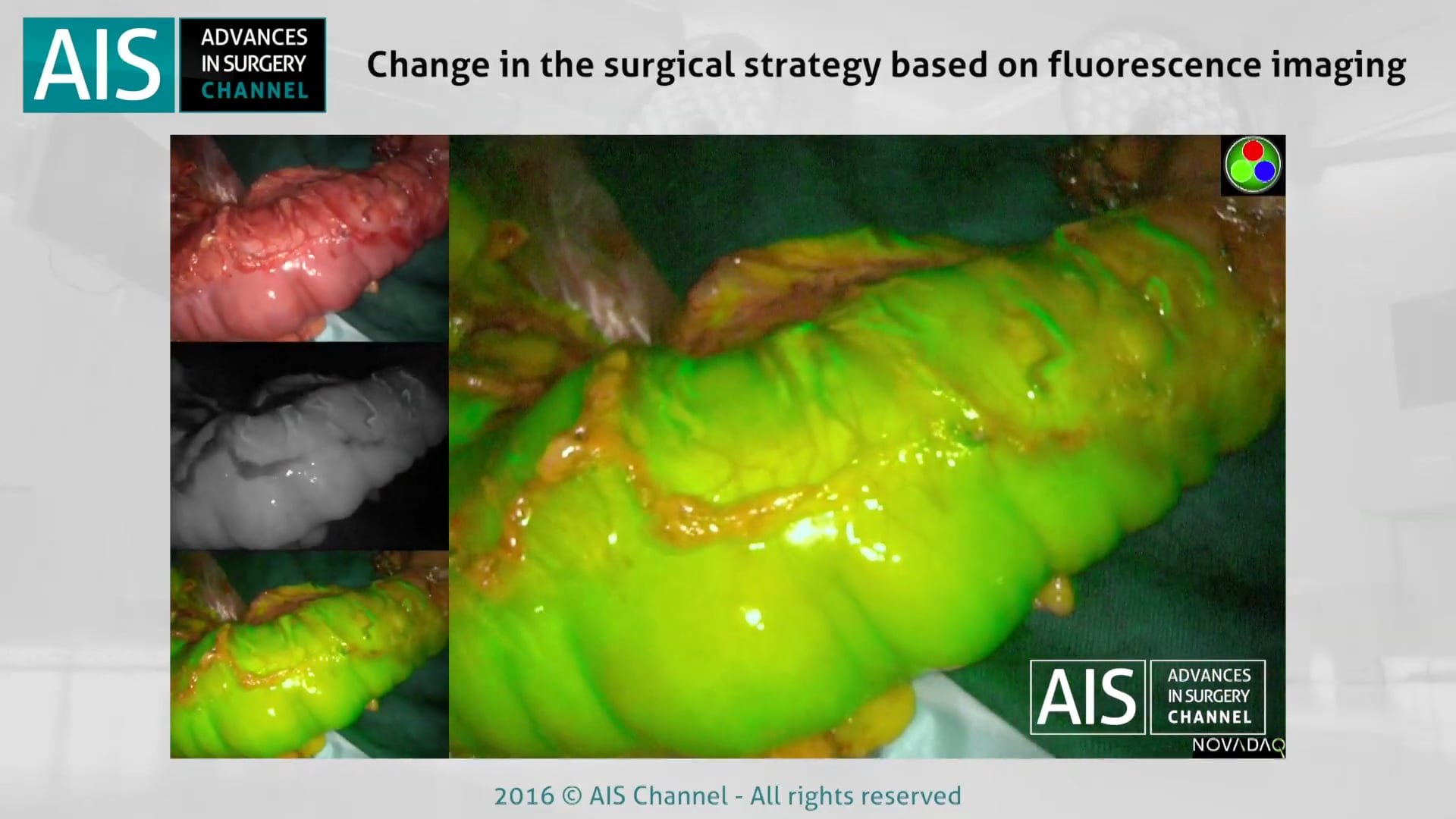 Subsequently it was decided to perform an LAR by Cecil approach 12 weeks after treatment.

The first step is to clamp the colon to work from the transanal approach. The bowel was accommodated to expose the mesosigma.

After the placement of the transanal device the pneumorectum was started, the tumor was identified and the rectal wall was sectioned to make the pursestring and continue the dissection of the mesorectum. This maneuver must be performed perpendicularly to the rectal lumen and in a circumferential manner.  In this case the transanal device was sectioned at the beginning of surgery as the tumor was very low.

The descending colon was mobilized and then the sigma was dissected, reaching the peritoneal reflection and leaving the colon free from the surrounding fat tissue.

Meanwhile the transanal approach was underway. The surgery progressed in down-to-up direction.

Finally both fields were communicated completing the total mesorectal excision. Collaboration between both teams is crucial. The specimen was introduced into the abdominal cavity to improve traction until the resection was complete.

The specimen was extracted transanally. At this point intravenous ICG pulses were administered to assess colon vascularization and to establish the suitable place to section the proximal margin.

Given that a favorable response was not obtained after ICG administration it was decided to reintroduce the colon into the abdomen, partially improving its appearance, although not sufficiently.

The colon was mobilized by decreasing the tension and traction of the mesocolon and ICG was administered again, now achieving a better response. Bad vascularization was objectified in the distal colon.  It was therefore decided to mobilize the splenic flexure.

The surgery continues in a medial to lateral approach, stopping under the retroperitoneal plane. We release the colon of the omentum to complete the mobilization of the splenic flexure. We also proceed to the section of the mesocolon preserving the left colic artery. We continue to section the mesocolon always keeping the pancreas and Riolan’s arcade in mind. Finally the entire colon was mobilized.

It was decided to make an auxiliary Pfannenstiel incision to examine the colon and ensure a well-vascularised anastomosis with no tension. ICG was injected again into the exteriorized specimen, achieving a good result, clearly identifying the section point and checking good vascularization of the coloplasty.

A T-T manual anastomosis was performed, completing the procedure. A loop ileostomy was built as the patient had received preoperative radiotherapy and the anastomosis was low in the pelvis.

The surgery took 210 minutes.  The patient started oral intake 24 hours after the surgery and left hospital on the 3rd postoperative day with no complications.

We can say that ICG provides an option to evaluate the perfect site to perform an anastomosis in colorectal surgery and makes it possible to ensure good vascularization in a simple and safe way.