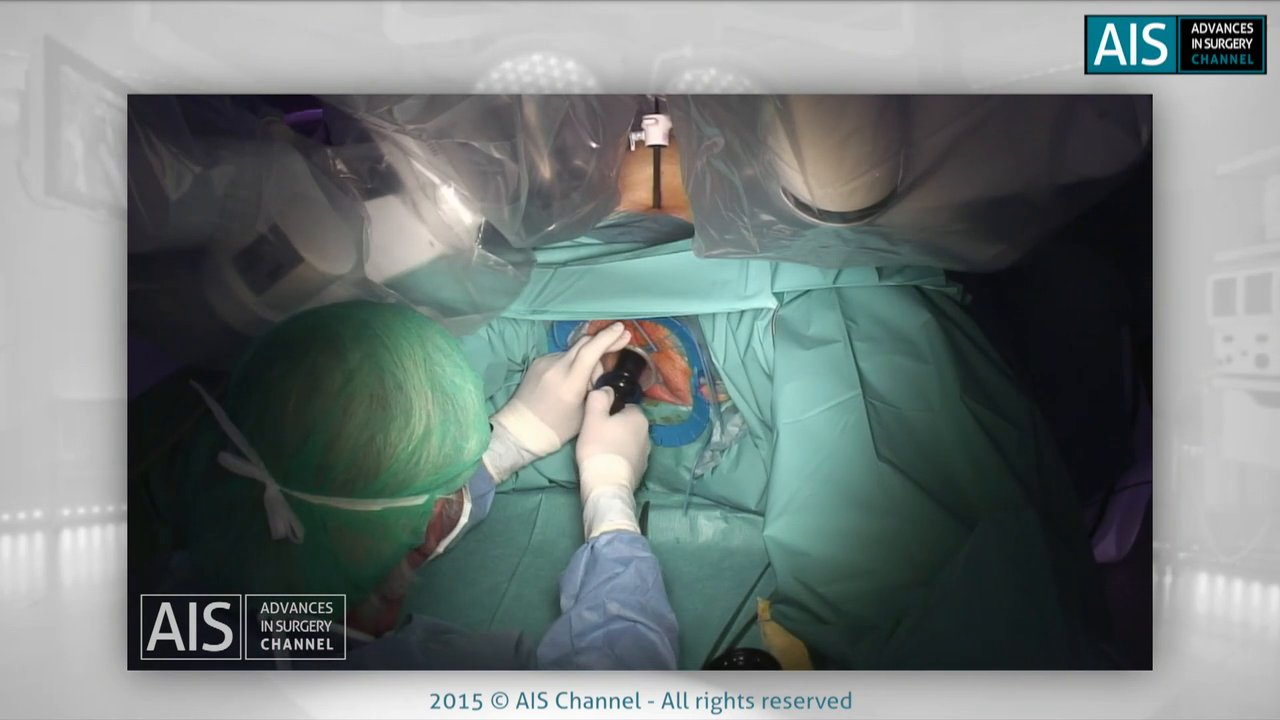 The treatment was completed with a transanal – robotic transabdominal total mesorectal excision. The patient was placed in the Lloyd-Davies position with the da Vinci Xi between his legs.

For the transanal setup a GelPoint Path was used as the access port that allowed use of conventional laparoscopic instruments, while the AirSeal® insufflator maintained a stable pneumorectum and continuously evacuated smoke. A 3D scope with a flexible tip enhanced the surgeon’s depth perception improving the dissection maneuvers.

The first maneuver is the dissection of the IMV. After accommodating the bowel and the colon the mesentery was exposed. The robot’s 4th arm performed traction from the vessels, and the scissors were used as an energy device and to perform sharp dissection.

Sigmoid mobilization from medial to lateral was accomplished following an avascular plane exposed by the mesenteric traction and the pneumoperitoneum. The da Vinci Xi system provides the surgeon with a 3D visualization that makes it possible to perform the surgical procedure with few camera movements, the left ureter was identified.

Lateral mobilization was accomplished; there was no need to detach the splenic flexure as the patient was scheduled for a colostomy.

The peritoneal reflection was opened to start dissecting the mesorectum. A correct plane is difficult to reach at the anterior part. The tumor is located at this height . The advantages of robotic-assisted dissection are obvious at this stage of the surgery, as the surgeon can work better in a reduced space with structures that are difficult to manipulate.

However, in this case of a locally advanced tumor, the plane was not completely clear in the transabdominal approach. The posterior dissection was made as far as possible, a strategy that improves exposure during lateral mobilization.

To achieve this part of the surgery, the rectum was pulled into the opposite direction of the lateral margin to be dissected. A 5-mm trocar placed in the suprapubic position was used to introduce an EndoClinch and improve traction pulling from the peritoneum. There was significant edema produced by radiotherapy.

Now the left side of the mesorectum was sectioned and the transabdominal mobilization was completed.

The GetPoint Path was placed for transanal access, and fixed with a couple of knots, a prolene purse string suture was made 1 cm below the tumor; it is important to tighten the knot to avoid pneumo leaks.

The hook was used to mark a radial tattoo 1cm away from the purse string suture. This tattoo would guide the beginning of the transanal dissection. Layer by layer the rectum was sectioned in an upwards motion: first the mucosa / submucosa, then the muscular layer until the holy plane was reached. Remember the prolene knot: if it is cut the working space will be lost.

The dissection must be performed as a cylinder, avoiding going too deep at only one plane. A rendezvous  with the transabdominal resection was produced at this height. From this approach the avascular plane of the anterior aspect of the mesorectum is more evident, which allows oncological resection and avoids unexpected injuries

A gauze was introduced to assist traction. The best exposure is obtained by pushing the surgical specimen into the abdomen. The LigaSure makes it possible to dissect, section and improve bleeding control when required.

Pelvic lavage with an iodine solution was carried out. As the patient was cognitively impaired with fecal incontinence and had received neoadjuvant therapy a terminal colostomy was performed.

The surgery took 180 minutes, with no intra / post operative complications. The patient started oral intake 48 hours after the procedure. The pathology was compatible with an R0 resection of the ypT3N0 specimen and a total of 12 lymph nodes were harvested. The patient was discharged on the 4th postoperative day.