<-- HI/society/image-guided-techniques-for-localizing-pulmonary-nodules-in-thoracoscopic-surgery-how-do-we-do-it/--> AIS CHANNEL - The ultimate surgical training experience! //
This site uses cookies. By continuing to browse the site you are agreeing to our use of cookies. Find out more here.
Categories
Image-Guided Techniques for Localizing Pulmonary Nodules in Thoracoscopic Surgery: “How Do We Do It?”
Posted in Lectures on 8 January 2021
Arturo Cirera
General Surgery Resident
Vall d’Hebron University Hospital Barcelona, Spain 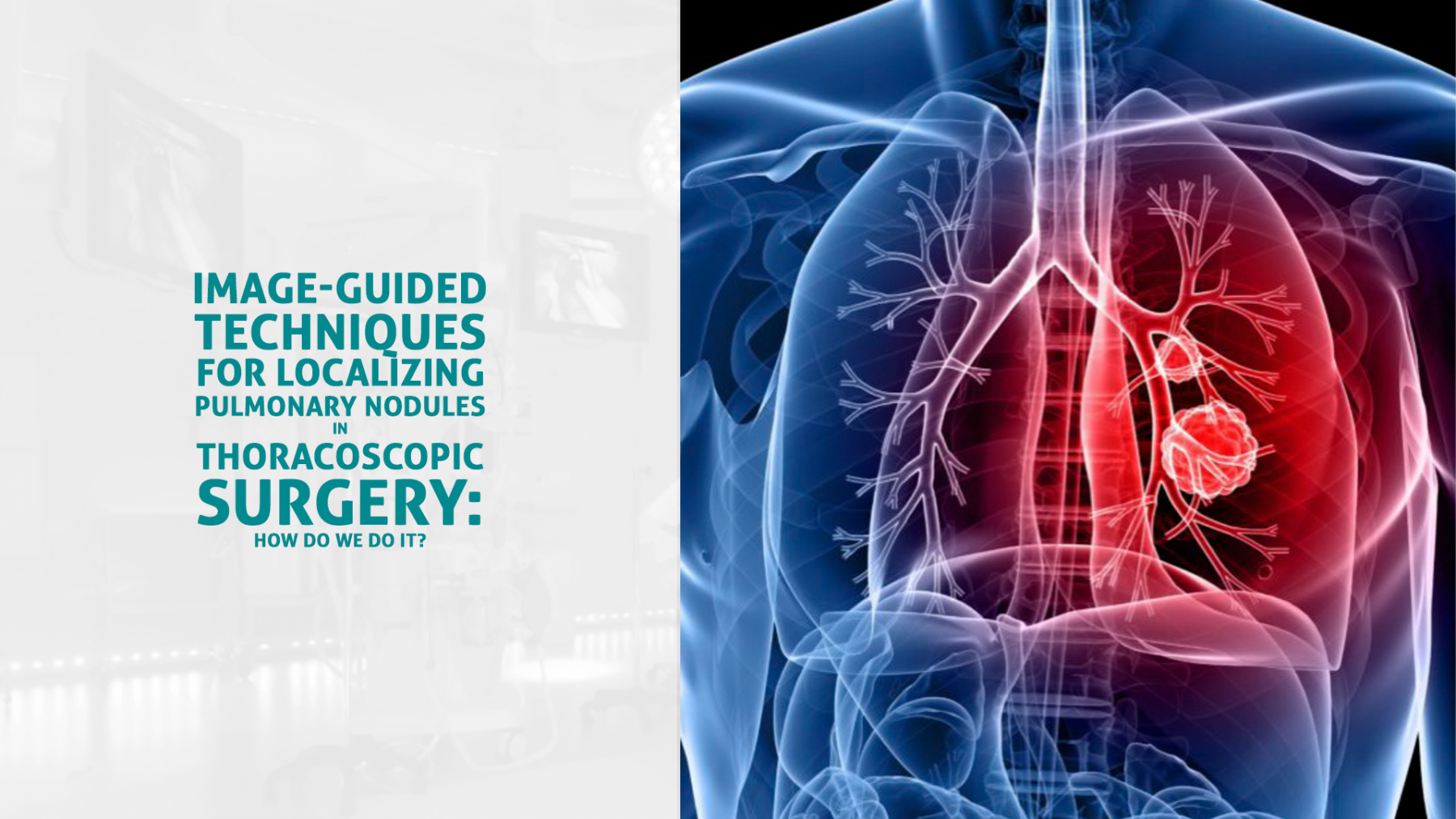 Video-assisted thoracoscopic surgery (VATS) has become the gold-standard method of performing almost all kinds of surgical interventions in the field of Thoracic Surgery. However, compared to open surgery, it might be more difficult to perform minimally invasive surgery for small computed tomography (CT scan) detected-nodules because those are thoracoscopically invisible and difficult to palpate with VATS. Therefore, localizing these kinds of partially solid nodules is a real challenge for thoracic surgeons.

To solve this problem, many preoperative and intraoperative localization methods have been developed during the last decade. The ideal technique must fulfill all of the following features:

Image-guided localization methods include two main imaging tools: bronchoscopy (transbronchial approach) and CT scan (transthoracic approach). These different methods include several localized materials such as dyes, microcoils, hookwires, contrast media, radiotracers and metallic fiducial markers. In this Surgical Open Classroom, we describe the two mainstream techniques that we do in our center, both of them performed CT-guided.

1) Computed Tomography-Guided Percutaneous Radiotracer Localization
It consists of a preoperative percutaneous placement of a technetium (99TC) radiotracer within or quite near the lung nodule using CT guidance. Later on, subsequent thoracoscopic localization by endoscopic radio probe is performed by detecting gamma-ray emission, converting them into digital counts and audio signals. The area with the strongest signal can be assumed as the nodule site.
Potentially severe complications of this nodule-localizing method include: pneumothorax, hemothorax and focal intrapulmonary hemorrhage. In addition, surgeons and the radiologists may be exposed to ionizing radiation.
In a series of 262 patients, Galetta et al. (2019) demonstrated that the radiotracer localization technique is safe and effective. In their study, all nodules were successfully localized and excised; most of them were malignant, 83.2% being primary lung cancer.

2) Indocyanine green based near-infrared fluorescence imaging
Near-infrared (NIR) fluorescence guided surgery is an emerging technique. It consists of a combination of dyes and NIR imaging devices to expand the visible spectrum. This method is suitable for either laparoscopic, thoracoscopic and robot-assisted surgery.

Some advantages of this technique include:
– Low absorption rates in human tissues.
– No radioactive toxicity.
– Low scattering in the tissues, which means that it has a deep penetration, extremely necessary to thoroughly locate lung lesions.

A. Applications based on vascularization

a. Identification of the intersegmental plane in lung segmentectomies.

b. Evaluation of the gastric conduit perfusion in esophagectomy in order to assess the viability of the digestive anastomosis and prevent leaks.

c. Detection of bullous lesions, based on the fact that those lesions have less vascularization.

B. Applications based on lymphatic drainage: surgical exploration with ICG intraoperative lymphography can result quite useful in order to treat iatrogenic chylothorax when conservative treatment fails.

C. Applications based on the enhanced permeability and retention (EPR) effect: solid tumors possess more blood perfusion than their surrounding healthy tissues. Thus, small molecules such as ICG passively accumulate into neoplasms so they can be detected intraoperatively using a NIR camera. ICG can be administered both intravenous (systemic) or selectively through computed tomography-guided microcoil placement.

Clinical effectiveness of this technique still needs to be demonstrated in more prospective clinical trials. However, there is some evidence that suggests its utility.