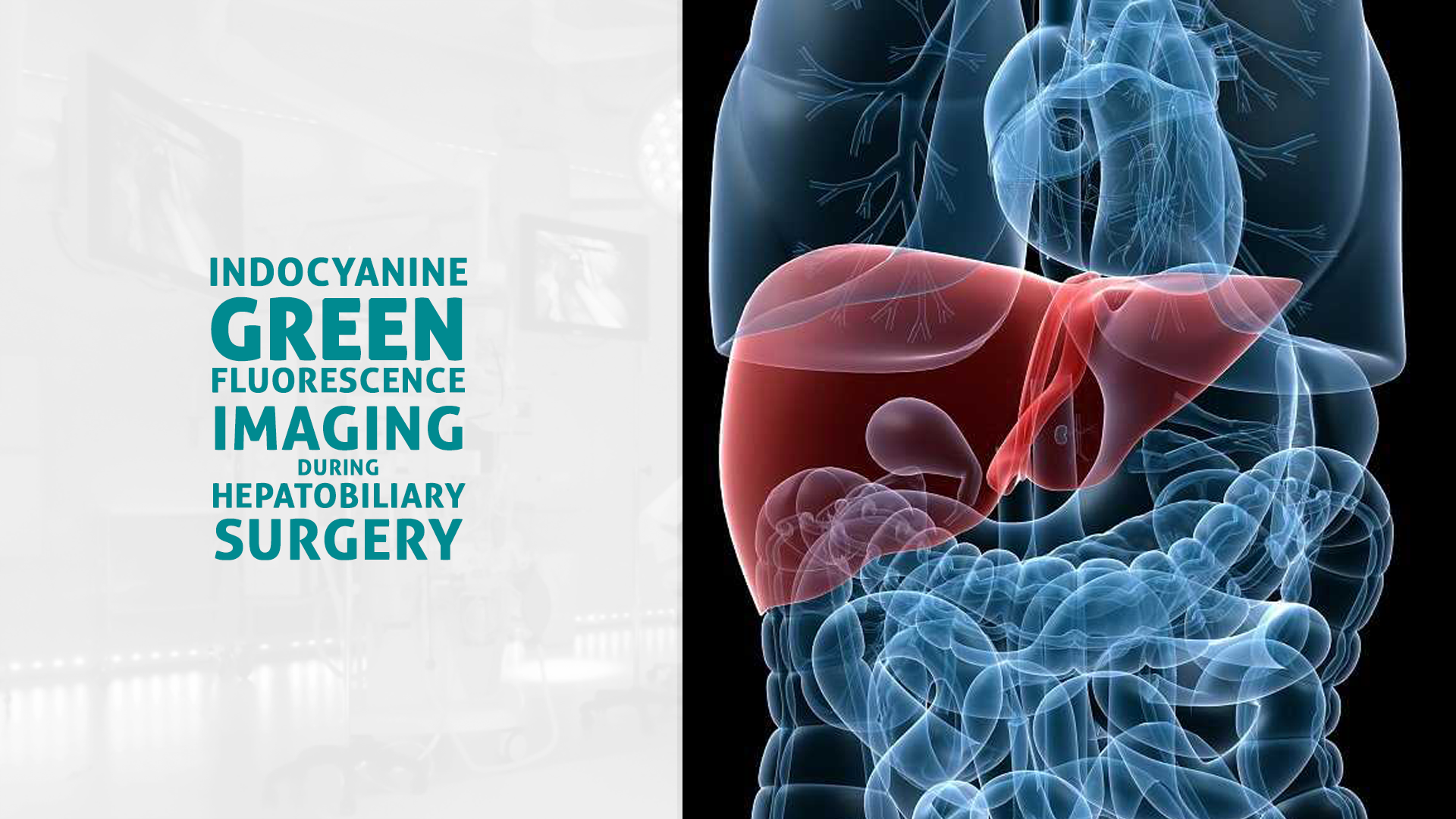 Introduction
Indocyanine green (ICG) is a fluorescent traceable dye that has been clinically used in a wide range of medical procedures.

ICG has different routes of administration but when it is injected intravenously, it binds to plasma proteins and remains there until it is selectively taken up by the liver, it does not metabolize, and it is excreted through the bile.

The main drawback is that the fluorescence signals emitted by protein-bound ICG can only be visualized through tissue of 5 to 10 mm thick, as light at 840nm is absorbed by water and hemoglobin.

ICG has multiple applications in the field of medicine. In the field of liver pathology, ICG has historically been used to assess hepatic function. Two tests have been described to assess liver function: plasma disappearance rate (PDR) and Indocyanine Green fifteen (ICG15).

Currently, the ICG technique is validated for three possible applications in hepatobiliary surgery. They can be categorized into:

Lesion detection
Hepatocellular carcinoma (HCC) and colorectal metastases are the most common primary and secondary malignant tumors of the liver respectively, and their resection remains the therapy of choice. By using intravenous ICG, liver tumors can be accurately identified due to the fact that malignant lesions can exhibit intense fluorescence.

The two main applications for lesion identification are to detect superficial lesions not seen in previous radiologic tests and to exclude malignancy from lesions with low fluorescence signal.

The bases of ICG imaging on malignant tumor entail different mechanisms and a different fluorescence pattern for each tumor type.

The main drawback of this technique is the limited tissue penetration. Hence, only superficial lesions can be imaged with this modality. However, lesions can be exposed during parenchymal transection.

Hepatic perfusion assessment and liver mapping
The major challenge in malignant hepatic surgery is performing a R0 resection with the maximal preservation of liver parenchyma. Accuracy in the resection of the corresponding anatomical segment is extremely important. Real-time delineation of liver segments after ICG intravenous administration can help surgeons to perform hepatic resections based on the precise segment irrigation by using systematic extrahepatic Glissonean pedicle isolation based on Laennecs’s capsule, as described by Sugioka.

The aim of this technique is to identify anatomic segments before resection.

· Positive staining technique. Boundaries of the hepatic segment to be resected can be precisely identified by injecting ICG into the corresponding portal branch. The fluorescent segment will be identified as the region to be removed.
· Negative staining technique. The segment to be removed appears as an ischemic region following the administration of ICG intravenously after clamping the corresponding portal pedicle. The ischemic region is seen as a non-fluorescence parenchyma.

Bile duct visualization
ICG needs to be administered intravenously 30-40 minutes before surgery to perform an extra-hepatic cholangiography, as it allows a perfect identification of biliary structures thanks to its exclusive biliary excretion. The dissection of Calot’s triangle is not required.
It can be useful in cholecystectomies, especially in patients with acute cholecystitis where structures are usually difficult to identify or in patients with anatomical variants.

Bile excretion of the ICG can be compromised in patients with obstructive jaundice or liver dysfunction, so this technique may be useless for these patients. Obesity or chronic cholecystitis are two of the main drawbacks of this procedure as the fat surrounding the bile duct and the thickness of the bile duct, respectively, can hide the fluorescence.

Intra-hepatic visualization: At the beginning of transection

1· ICG imaging can be used as an intra-hepatic cholangiography to detect bile leakage following an hepatectomy.
2· Real-time visualization of the liver irrigation allows determining if an ischemic region is left after a segmentectomy or hepatectomy. This technique might prevent potential post-operative complications such as intra-abdominal collections, biliary leakage or even tumor recurrence.