<-- HI/society/laparoscopic-d2-plus-sub-total-gastrectomy-gastric-cancer/--> AIS CHANNEL - The ultimate surgical training experience!
This site uses cookies. By continuing to browse the site you are agreeing to our use of cookies. Find out more here.
Categories
Laparoscopic D2 plus Sub-total gastrectomy for gastric cancer
Posted in Lectures on 24 May 2018 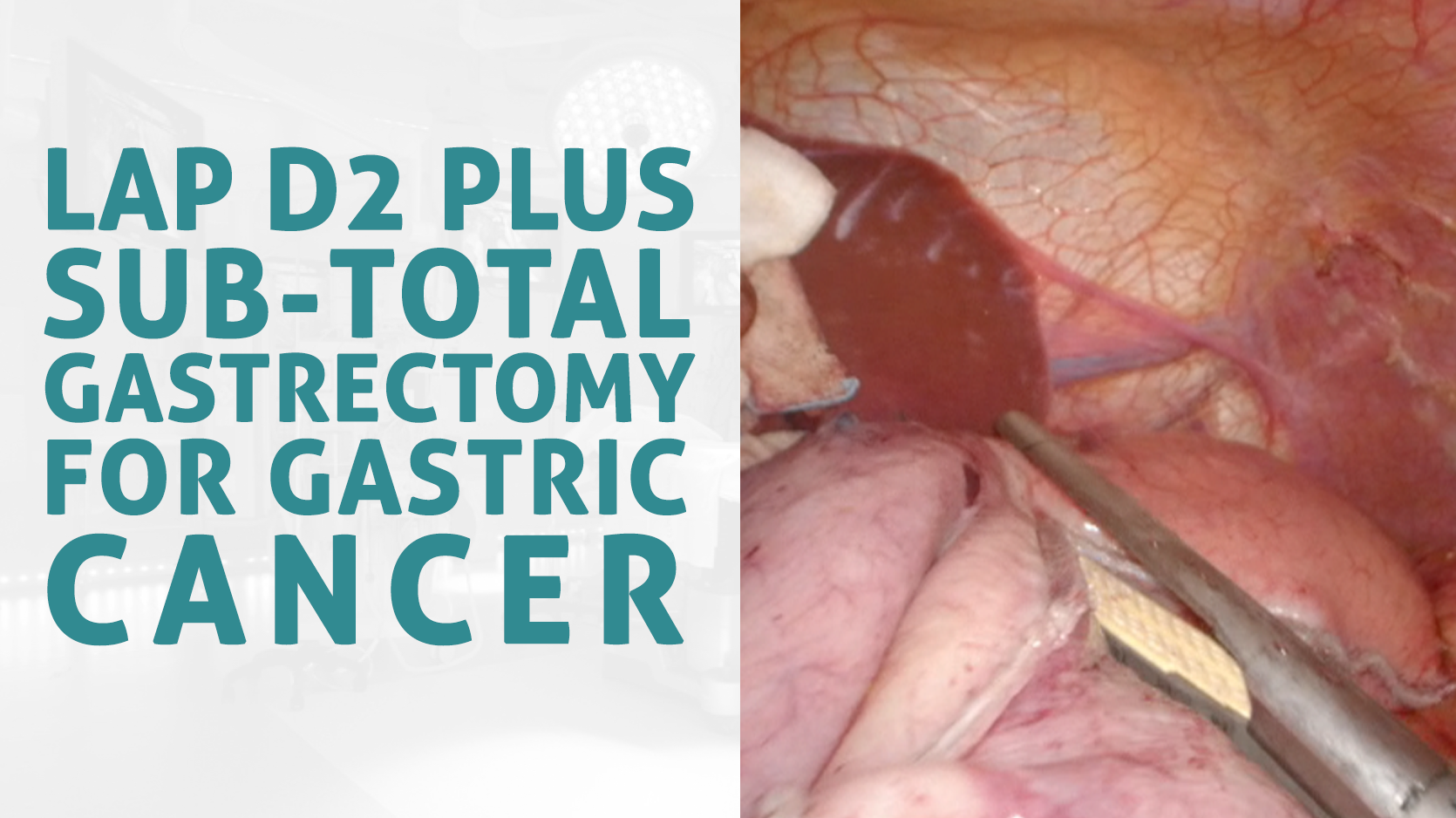 A 68-year-old man with a past medical history consistent with peptic disease and Helicobacter Pylori was referred for endoscopic evaluation, complaining of weight loss and dyspepsia during the previous 4 months. Gastroscopy documented a pre-pyloric sub-stenotic ulcer and the biopsies were consistent with a diffuse type gastric adenocarcinoma according to Lauren’s classification.

The patient was on medication for type II diabetes mellitus and had not undergone abdominal surgery in the past, with an ECOG Performance Status of 1. The BMI was 24.8.

The patient was positioned supine with open arms and legs. The screen was placed next to the patient’s head/left shoulder with a 10°-30° tilt. The assistant and scrub nurse were positioned on the right side of the patient. The surgeon began in between the legs and the assistant holding the camera was usually positioned on the left side but they switched positions during the dissection steps.

The peritoneal cavity was insufflated using CO2 gas with a Veress needle in the left upper quadrant and setting the pressure at 12 to 14 mmHg.

At the beginning of the procedure, the exploration of the abdominal cavity makes it possible to verify the absence of peritoneal and liver metastases. Dissection is usually conducted starting from the greater curvature of the stomach with gastro-colic dissection in a clockwise manner. Exposure is conducted using the technique described by Woo in 2001, sectioning the pars flaccida of the hepatic-gastric ligament and then clipping a 2/0 prolene suture to suspend the left liver lobe using a swab and inserting it in the abdominal cavity. The straight needles then transfix the abdominal wall left and right to the falciform ligament and are then tied. Gastric dissection starts by the lesser sac. The assistant uses trocar C to grasp the omentum and the surgeon uses trocar B to grasp with the left hand and trocar D to dissect with an energy device with the right hand. With this maneuver, the stomach is raised upward on the right, opening the lesser sac and making the greater curvature dissection and section of the gastroepiploic vessels possible.

The greater curvature and its vessels are dissected starting at the origin of the left gastro-epiploic arcade running up to the right colo-epiploic dissection (nodal stations 4a and 4b). Vessels are clipped and then sectioned.

The middle colic vessels are now dissected up to the origin of the superior mesenteric vein showing nodal station 14. Dissection was performed according to the latest recommendations of the Japanese Gastric Cancer Association. The gastroepiploic vein was dissected. The pancreas is shown on the right and dissection continues towards the subpyloric plane. The right gastroepiploic artery was then dissected clipped and sectioned (nodal station 6). The dissection now approaches the hepatic pedicle, showing the hepatic artery and the common bile duct. Nodal station 12 is followed by nodal station 8.

The lymphadenectomy now approaches the common hepatic artery (nodal station 8), and the celiac trunk. The left gastric vein is now clipped and sectioned. The origin of the splenic artery is dissected. Nodal station 7 is now dissected and the left gastric artery is sectioned. The celiac trunk (nodal station 9) is dissected. The posterior mesogastric plane is completely dissected up to the diaphragmatic pillars. The two right para-cardial nodes (station 1) are now dissected. The lesser curvature is mobilized, dissecting station 3. Dissection of the stomach is now completed. A linear stapler inserted using trocar E can section the organ. Finally, a transmesocolic gastroenteroanastomosis was  performed with a Roux en Y reconstruction. A jejuno-jejunostomy was then performed at a distance of 40-50 cm.