<-- HI/society/right-colectomy-robotic-approach-step-step/--> AIS CHANNEL - The ultimate surgical training experience!
This site uses cookies. By continuing to browse the site you are agreeing to our use of cookies. Find out more here.
Categories
Right colectomy by robotic approach: step by step
Posted in Videos on 11 April 2017 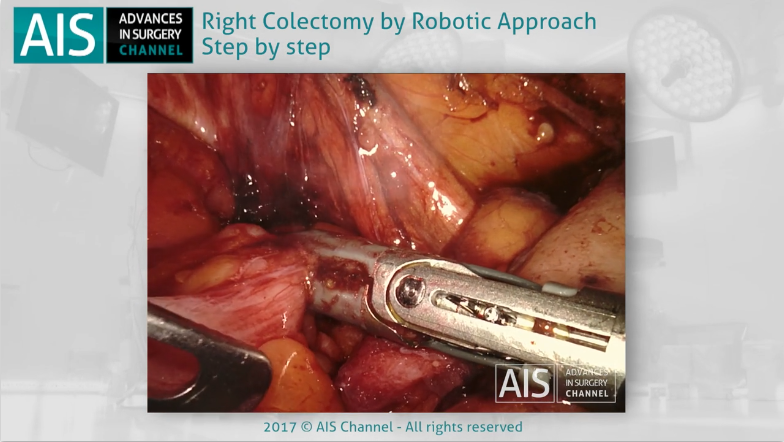 Laparoscopic right colectomy is associated with earlier return to normal bowel function, shorter length of hospital stay, fewer wound complications, and similar oncological outcomes as can be achieved through the conventional open approach. The construction of the ileocolic anastomosis can be accomplished with an extracorporeal or intracorporeal technique.

Nevertheless, there is an increasing body of literature describing the benefits of intracorporeal anastomosis in right hemicolectomy, namely the ability to mobilize the bowel under vision without extending traction on the mesentery.

Potential intraoperative benefits of the intracorporeal technique include less mobilization, especially in patients with a high body mass index, reduced manipulation of the bowel, smaller incisions, and freedom to choose the extraction site. Postoperative benefits include reduced narcotic use, faster time to flatus, shorter length of hospital stay, and reduced hernia rates.

Robot-assisted right colectomy with intracorporeal anastomosis is a relatively new means to overcome some of the technical challenges of the laparoscopic approach, and early studies have reported its feasibility and safety, improved early postoperative outcomes, and similar rates of anastomotic leakage.

The patient is placed on the operating table in a supine position, with arms along the body and legs closed. Pneumoperitoneum is established via a Veress needle at the Left hypochondrium.

Then we proceed to place the ports after insufflating to the appropriate level.

Ports may be shifted according to the patient’s habitus or the position of the internal anatomy. The distance to the Da Vinci ports should range between 6–10 cm.

A laparoscopic exploration of the peritoneal cavity is then carried out in order to rule out peritoneal seeding or liver metastasis. In order to achieve exposure of the right and transverse mesocolon, a slight Trendelenburg (5°–10°) and left tilt (5°–10°) are applied. The camera is placed in Arm 2 to perform the targeting. Then the system is docked.

In this case, several adhesions from previous surgery were first dissected, but in general terms the first maneuver is to locate the ileocolic and superior mesenteric vessel pedicles. The small bowel and the omentum are displaced and the transverse colon and the ileocecal junction are towed cranially and laterally respectively.

A4 is used to keep the superior mesenteric axis in traction, while A1 and A3 are used for dissection. This use of the instruments can be changed as the dissection is performed. In this case we use the hook and the vessel sealer for the cauterization. Finally we cut the ileocolic vessels using clips and the vessel sealer.

A medial-to-lateral approach creates a mesenteric window, just inferior to the ileocolic vascular pedicle. The right retrocolic space between the mesocolon and the right prerenal fascia is the natural surgical plane, which extends laterally and cranially. The inferior part of the duodenum is the first exposed structure, followed by the uncinate process of pancreas. We place a gauze in the dissected space to facilitate later identification from the anterior side.

The transverse colon is mobilized up to the hepatic flexure along the prior plane of dissection, joining the right retrocolic plane. In this case, the dissection is performed with the hook and the vessel sealer. The surgical assistant uses a clamp to pull the colon so as to be able to work in the hepatic angle with the robot.

We continue with the release of the ascending colon, alternating all the time between both power instruments, which gives plenty of independence for the surgeon to work without having to depend on the assistant. In addition, the vessel sealer can also be used as a clamp and retractor.

The right colon is completely mobilized once the distal ileum has also been dissected.

Once the transection point has been chosen, we replace the vessel sealer with the endoscopic robotic stapler. We verify proper vascularization of the ileon with indocyanine green and section it.

We go on to perform the same process on the colon. We choose the transection point and dissect the colon at this level. Once dissected we use the endoscopic robotic stapler for its section and verify that the perfusion is correct by means of indocyanine green, thus completing the right colectomy. The surgical specimen is placed on top of the liver to be extracted later through a Pfannenstiel  incision.

The anastomosis is checked once more with indocyanine green, revealing a perfectly irrigated anastomosis.

The enterotomies are closed with a vicryl suture. Intracorporeal anastomosis can be performed safely and effectively. The literature describes a faster recovery of bowel function associated with this  technique, due to the reduction of visceral trauma caused by tissue-stretching, particularly at the level of the mesenteric pedicle. Other potential advantages include the possibility of performing a smaller abdominal incision for specimen extraction in more convenient sites (usually a Pfannenstiel incision), with better cosmetic results, decreased incisional hernia rates and less postoperative pain.

In conclusion, the robotic right colectomy is a safe and reproducible procedure, with results comparable to laparoscopy.

It is also a useful procedure to develop robotic approach skills for surgeons in training and to improve the learning curve.