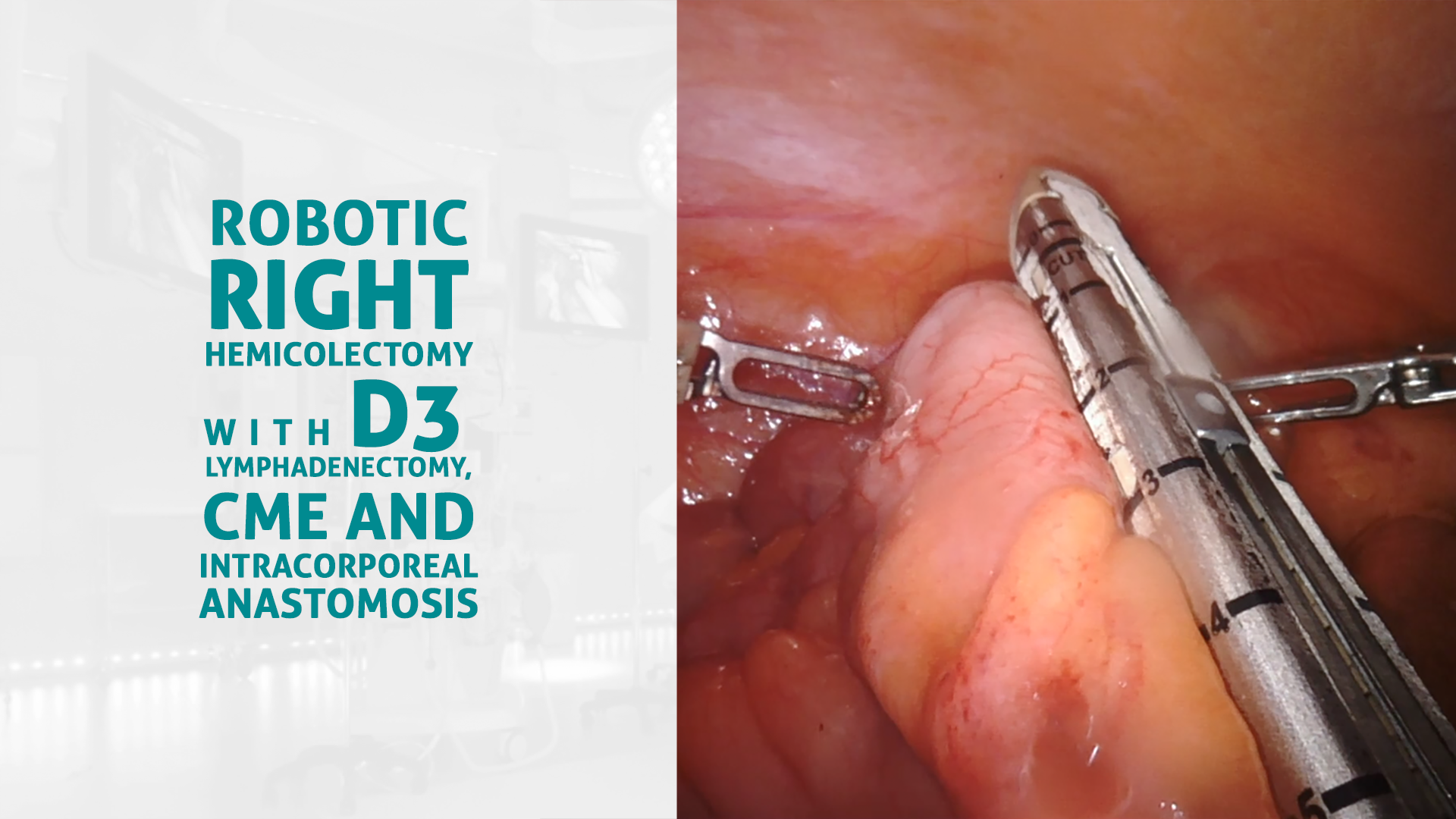 In this video, we present the case of a 66-year-old man with cecum adenocarcinoma and BMI of 29.42 kgs/m2, ASA II. No metastatic disease was identified in the staging CT scans. A robot-assisted right hemicolectomy with complete mesocolic excision including central vascular ligation, D3 lymph node dissection, and mesenteric resection with intact visceral peritoneum was performed.

The patient is placed on the operating table in a supine position, with arms along the body and legs closed. Pneumoperitoneum is established via a Veress needle at the Left hypochondrium.

Then we proceed to place the ports after insufflating to the appropriate level.
– 1 port is placed midline ~4–5 cm above the pubic symphysis.
– A line is drawn from port 1 to where the left mid-clavicular line crosses over the left subcostal margin.
– Ports 2, 3, and 4 are placed at a distance of 8 cm from each other on the line. When performing targeting, port 2 should be considered for the initial endoscope.
– The assistant port should be triangulated as far as possible from the da Vinci ports and lateral to the left mid-clavicular line.

In order to achieve exposure of the right and transverse mesocolon, a slight Trendelenburg (5°–10°) and left tilt (5°–10°) are applied. The camera is placed in Arm 2 to perform the targeting. Then the system is docked. We proceed to introduce the different instruments through the three working arms and the surgery is starting.

The greater omentum is retracted over and above transverse colon, which is then subsequently pushed up superiorly. The small bowel is retracted medially so as to place it on the left side of patient’s abdominal cavity.

The next step is to dissect along the central vasculature of SMV and SMA axes towards the cephalad direction, dissecting out the entire right colonic mesocolic tissues. Further dissection of cephalad reveals the middle colic vessels and then the right branch of middle colic artery is identified and ligated. In this case we join again Hem-O-Lok clips. For the ligation of all named major vessels, two Hem-O-Lok clips are placed proximally on patient’s side prior to division. The dissection is then carried out along the SMV. The ileocolic vein is first identified and sectioned, in this case using Hem-O-Lok clips and the vessel sealer operated by the assistant.

Continuing with the intervention towards the cephalic area, the right branch of the middle colic vein is observed, which is sealed and divided by the vessel sealing device. Care is taken to dissect out the entire right colon mesocolic tissues up to the root of the middle colic vessels. Blunt dissection is continued also using the hook, leaving the pancreas on the posterior side, taking care not to damage the surrounding structures.

Subsequently, the visceral peritoneum of the mesocolon is opened and its section is started from medial to lateral. During the entire surgery, the assistant’s work with instruments such as the aspirator is very important. The medial to lateral dissection is then completed over the Gerota’s fascia, taking care to identify and preserve the duodenum, right ureter and gonadal vessels.

The next step is the complete section of the meso of the terminal ileum. In this case it is carried out by means of the vessel sealing device that the assistant manages. Once the meso section is completed, the section of the terminal ileum is performed using a mechanical stapling device. At this time we leave a gauze in the previously dissected area over the duodenum and move on to the next step of the intervention.

Once the transection point of the transverse colon is decided, the greater omentum is sectioned and then the colon is dissected for its section using another mechanical suture device.

At this time, the mesocolon section and its adhesions to the duodenum through the avascular plane are completed. The superior mobilisation of transverse colon is then finished over the hepatic flexure. The lateral and posterior dissection is then completed also, dissecting off the attachments of the right colon.

Once the resection of the specimen has been carried out, the terminal ileum and the transverse colon are prepared to perform the anastomosis. Prior to this, its correct vascularization was verified by indocyanine green angiography.

Once the optimal vascularization has been verified, a functional side-to-side mechanical intracorporeal anastomosis between the ileum and the transverse colon is performed. Two enterotomies are made on each side and an endo-stapler device is introduced to create the anastomosis. The enterotomies are closed with a running vicryl suture, ending the surgery.

The surgery took 140 minutes. The patient started oral intake 6 hours after the surgery and left hospital on the 2nd postoperative day. Pathological examination ruled out a pT3N0 (0/32) colon adenocarcinoma.