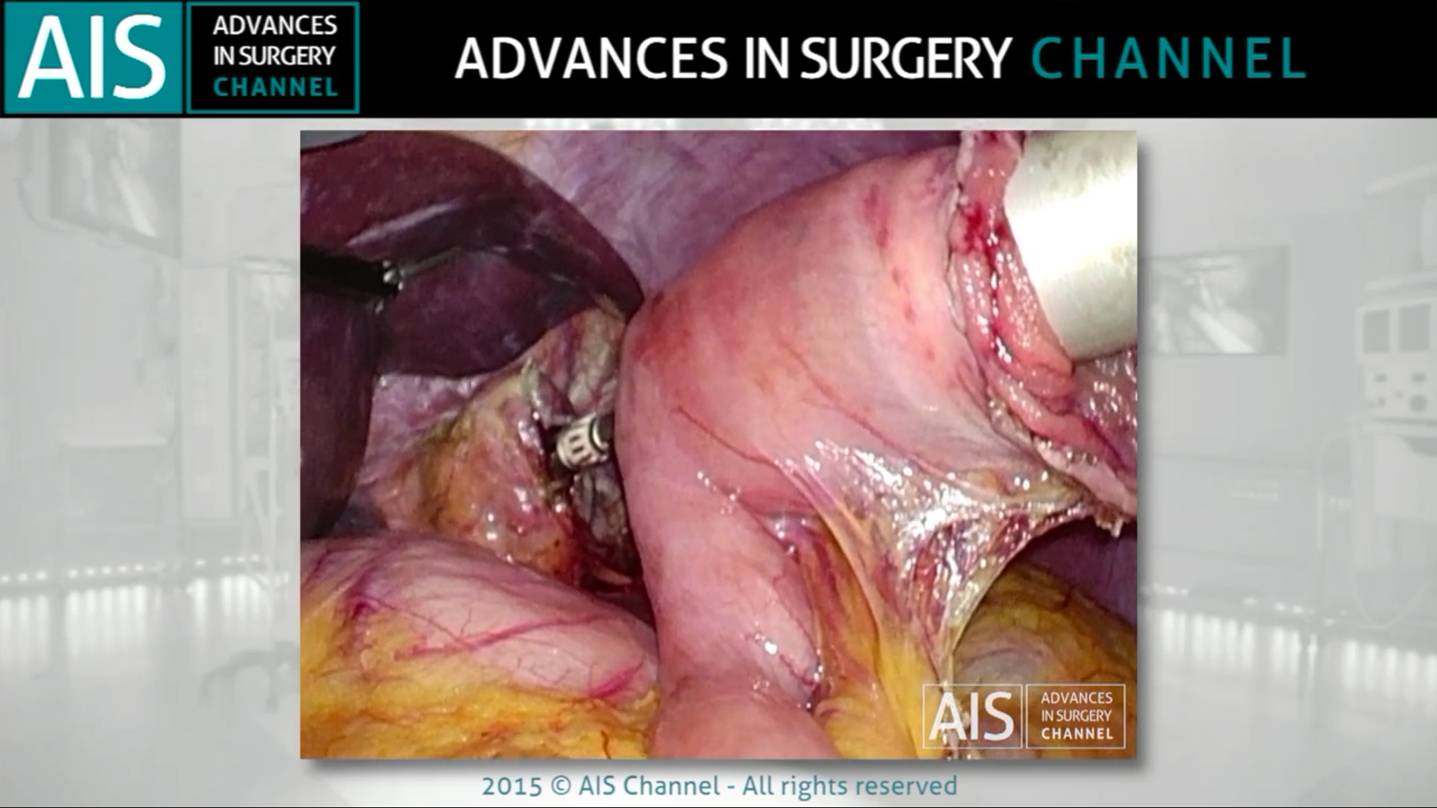 A 38 years female patient with history of restrictive pulmonary disease due to morbid obesity BMI almost 43 Kg/m2 underwent a sleeve gastrectomy by the laparoscopic approach. She developed gastroesophageal reflux disease one month after surgery.

Medical therapy was given at the outpatient clinic with bad response. Further investigation was performed with a gastroscopy that revealed grade B esophagitis, there was mild hypotonia at the lower esophageal sphincter and severe acid reflux with a De Meester score of 47,9.

An upper GI series described a hiatal hernia associated with reflux. Ten months after the sleeve she had lost 44kg with a BMI of 27,7 Kg/m2

Conversion into a Roux-en-Y Gastric bypass by MIS was proposed to treat the GERD.

The patient was placed in supine position with opened legs. The leading surgeon stood between the legs plus two assistant surgeons were located at each side of the patient.

A total of six trocars were used, one of 12mm in supra umbilical position for 3D flexible tip scope, three trocars of 12mm for working channels and one of 5mm more lateral at the left flank and the last of 12mm at the umbilicus that is used to at the inframesocolic phase of the by-pass.

The first maneuver is to dissect the upper part of the stomach, the assistant surgeons performed traction to expose the lesser curvature. The hook was used to open a window at the peritoneum at the height of the second short gastric vessel, then the laparoscopic Debekeys were used for blunt dissection and to create a tunnel behind the stomach.

Lateral dissection was performed with the Maryland to individualize the stomach from the crura, more adhesions were found at this part of the procedure due to the previous surgery. The goal was to create enough space to introduce the mechanical suture.

The next step was to set the anvil shaft, the anesthesiologist delivered it through the mouth into the esophagus and the pouch, the surgeon performed a gastrotomy at the zone of confluence of the stapler line and created a purse string of Vicryl to fixate it.

Now the camera was changed to the umbilical trocar to work at the inframesocolic phase of the surgery. A gap was created at the major omentum. This allowed an antemesocolic placement of the alimentary limb.

The angle of Treitz was located and the surgeon measured 50cm from it, this was the point of section for the biliopancreatic and the alimentary limb. The mesenterium was prepared with the hook and the LigaSure.

A enterotomy was performed at the alimentary limb and the incision of the 12 mm trocar at the left flank was enlarged to introduce the EEA Device. This maneuver must be synchronized to avoid laceration of the gut. The punch was exteriorized and coupled with the anvil shaft to create the anastomosis.It is important avoid rotation of the small bowel.

The device was covered with a bag to protect the wound during its extraction, that at this part was contaminated with the mucosa.

Once again the camera was changed into the supra umbilical trocar to work at the supramesocolic space. The small bowel was closed with a firing of a mechanical suture.

A couple of knots were performed between the alimentary limb, the pouch and the remnant stomach to prevent torsion and tension.

Then a 50 cm ribbon was used to measure 150 cm from the pouch and create the jejunal-jejunal anastomosis. In order to perform this part of the procedure the surgeons changed their position. The leading surgeon and the camera assistant  moved to the right of the patient and the other assistant between the legs. The camera was changed to the trocar of 12mm located at the right flank.

A enterotomy was created with the hook and the mechanical suture was introduced. Once again a combined maneuver was needed.The leading surgeon took care of the biliopancreatic limb and the camera assistant performed traction from the alimentary limb.

Surgery was uneventful and lasted 90 min. The patient started the oral intake 24 hours after the procedure and left the hospital the next day. Nine months later, she remains asymptomatic with good weight loss (BMI of 22 Kg/m2 )