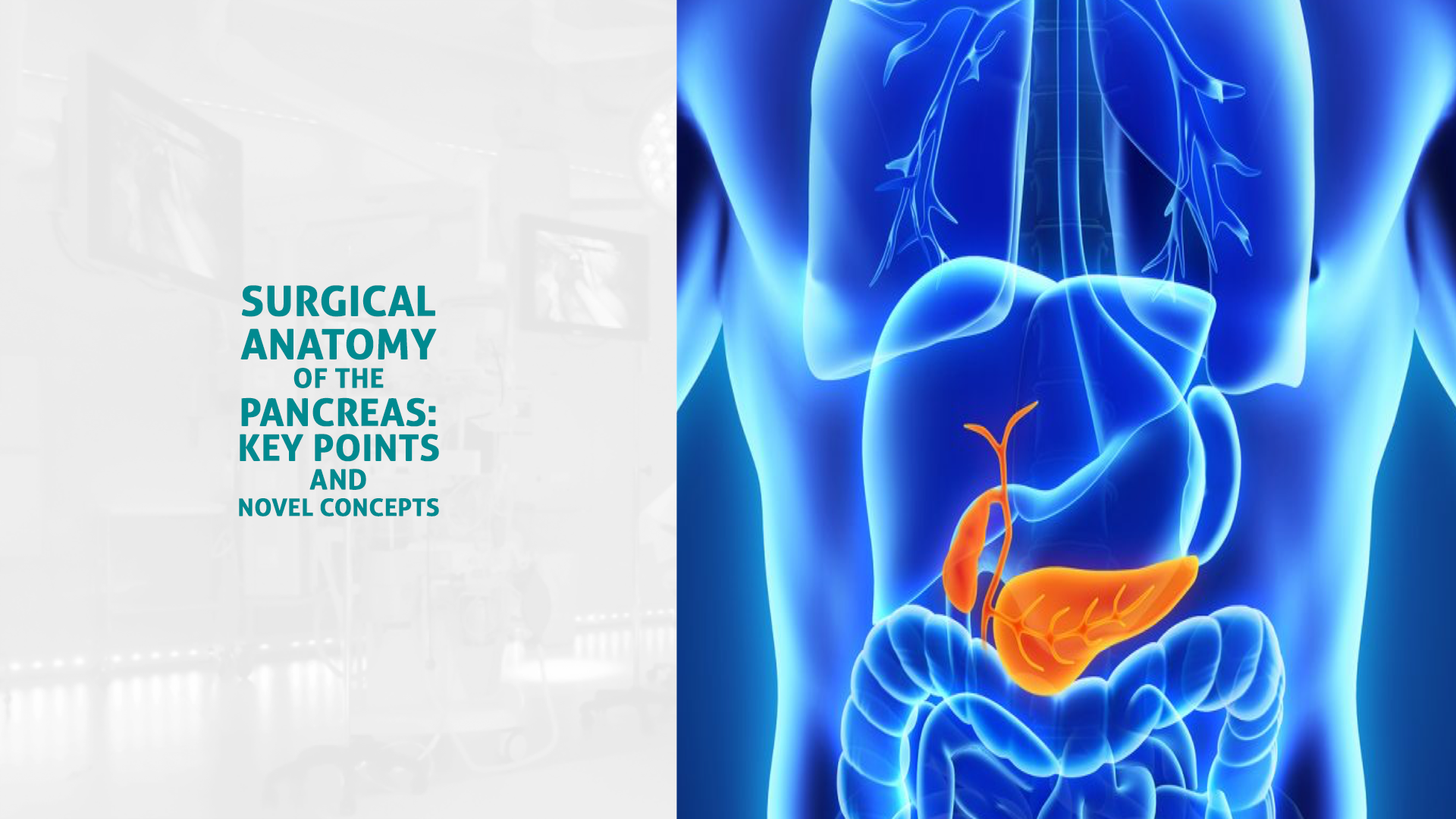 The pancreas is a central abdominal organ, located in the retroperitoneum. It is important to highlight its relationship with the superior mesenteric vessels, both artery, and vein.

In order to access the retroperitoneal structures and, therefore, surgically locate the pancreas, it is necessary to open the lesser sac, which is a peritoneal recess between the stomach and the posterior abdominal wall.

The pancreatic parenchyma is divided into head, neck, body and tail.

The arterial vascularization of the pancreas should be divided according to each anatomical region:

In pancreatic surgery, it is mandatory to always identify the common hepatic artery, because there is significant variability in its origin, which can lead to an unwanted resection of arterial branches:

As for the pancreas’ venous drainage system, it is a system that runs parallel to the arterial one. It ends in the portal vein, the confluence of the splenic and superior mesenteric veins. Just as the splenic artery is located above the pancreatic body, its homologous vein does so on the posterior face.

This is based on the fact that the arterial invasion of the tumor is the main conditioner of its resectability. Therefore, the first step in surgery should be to determine the degree of arterial involvement before performing an irreversible surgical step. The advantages are:

· The possibility of completely dissecting the posterolateral margin of the tumor with a lower risk of bleeding.
· To determine the degree of resectability in borderline tumors.
· To determine the degree of resectability in tumors that have received neoadjuvant treatment, since it can produce periarterial stranding and make it difficult to re-stage it by computed tomography.
· To make easier complex resections of Borderline or locally advanced pancreatic tumors, by favoring the arterial dissection from tumor and facilitating complex vein reconstructions.

Under the heading of artery-first approach, up to 6 different techniques have been described for the SMA approach: posterior, superior, right/medial uncinate, left posterior, mesenteric and anterior approaches.

There is no better technique than another. The surgeon’s decision to perform one or the other will depend on the location and size of the tumor. One must know all these approaches in order to achieve an optimal pancreatic tumor resection.

2.2. The mesopancreas (SMD)
The mesopancreas is the neurovascular bundle that connects the pancreatic head to the SMA and right celiac ganglion. It was first proposed by Gockel et al. (2007) in analogy to total mesorectal excision in rectal cancer, defining the concept “Systematic Mesopancreas Dissection” (SMD), which includes:

The importance of knowing the mesopancreas lies in the fact that pancreatic ductal adenocarcinoma has been seen to have perineural invasion (PNI) in 70 to 100% of cases. The perineurium contains blood vessels within it. Therefore, the ability of cancer to spread through the surrounding neuronal tissue has been demonstrated, acting as a “cancer highway”.

The SMD levels of dissection were classified by Inoue et al. (2015) into 3 planes according to the extension around and along the superior mesenteric artery. The dissection through the correct plane that separates the mesopancreas from the arteries and veins (plane 3 of Inoue), allows a separation of the tumor, avoiding arterial resections, and turning unresectable tumors in resectable. This concept is called “periarterial divestment”, and has been reported in detail in a recent paper from Heidelberg University.

Based on the same concept that arterial invasion determines tumor resectability, it is mandatory to name the periarterial divestment technique, a novel operative technique which consists of the clearence of the neurolymphatic tissue around the peripancreatic visceral arteries. Its importance lies in borderline and locally advanced tumors after having received neoadjuvant treatment. This is a novel idea because it presents as an alternative to arterial resection, which has great morbidity and mortality rates. The Heidelberg group reported the importance of this technique approaching locally advanced pancreatic tumors in the Triangle operation scenario.