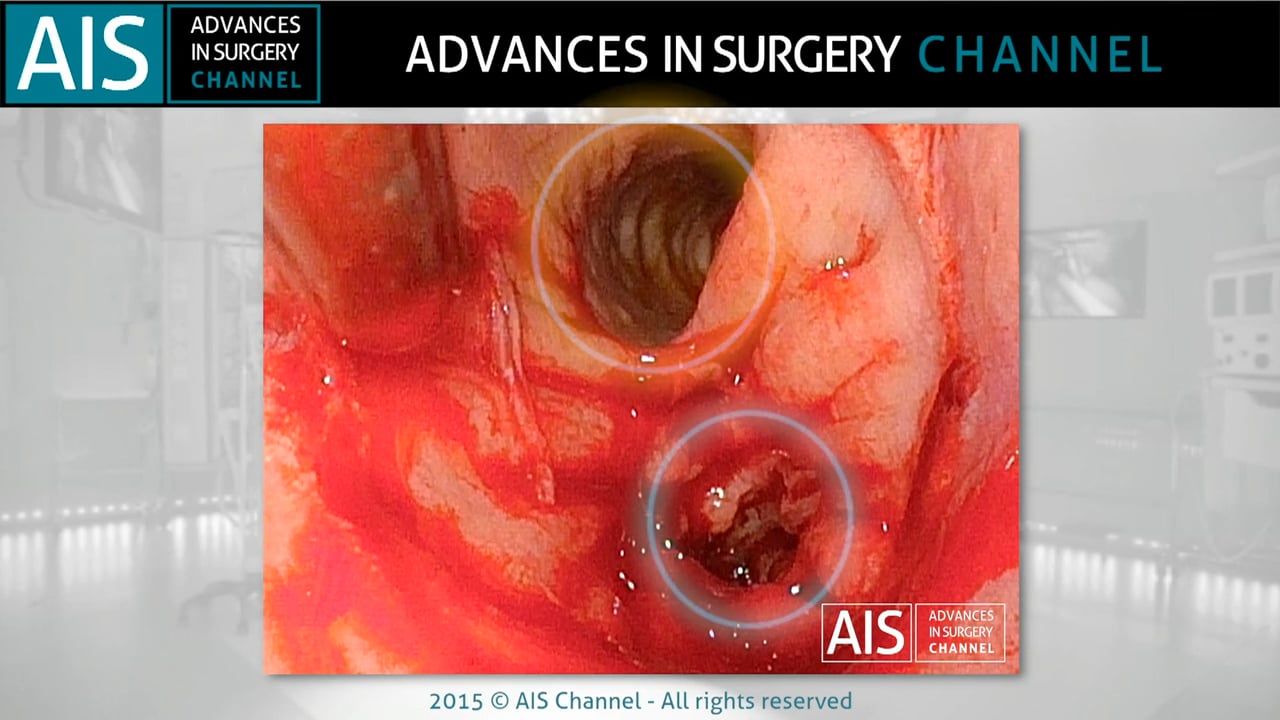 A laparoscopic low anterior resection using the Cecil approach with a protective ileostomy was performed with no incidents. Colorectal L-T anastomosis was carried out using an EEA™ 33 mm Stapler, and the colon stump was closed using a beige 60 mm Endo GIA™ Tri-Staple™. (AP pT2N0, intact mesorectum).  Subsequently a closing ileostomy was conducted 2 months later. Previously a barium enema had been applied checking the integrity  of the colorectal anastomosis.

The patient had intermittent fever after the ileostomy reversal, so he visited the  emergency room 20 days after surgery. The patient was hemodynamically stable. The rectal anastomosis was unscathed by the digital rectal examination. Various tests were conducted, including: a blood test with normal results, a CT scan showed a presacral collection adjacent to the terminal stapler line of the colon with bubbles inside, and trabeculation of the fat planes. These findings were consistent with a leak from the linear stapler line of the blind loop of the colon. The circular colorectal anastomosis was normal.

The study was completed with a new barium enema that showed a L-T permeable anastomosis and filiform contrast extravasation at the bottom of the blind loop of colon.

We began treatment with antibiotics and later we decided to perform a revisional surgery through a combination of the abdominal and transanal approaches.

First the surgery was initiated abdominally. The  pelvis was found to be locked with no intraabdominal free fluid. Then we started the transanal exploration under abdominal control.

To start via transanal we can see the lumen of colorectal anastomosis L-T and the lumen of the blind loop of colon. We carefully examined the colon stump, finding a small defect  in the medial portion of the suture.

We decided to continue placing a gauze on the rectal lumen to collapse it and prevent pneumo leakage, as well as to prevent contamination. Then we closed the hole using a Prolene pursestring. At this time the procedure takes place in a very reduced surgical field, coordination between the leading surgeon and its assistant is essential to achieve accurate movements. There is no doubt that 3D visualization system provides the depth perception that enables this maneuvers.

The pursestring is tested by pulling from the suture, it is completely sealed. Then we placed a Tachosil to reinforce the suture, we moisturize it and then introduce a piece of glove to perform pressure against the blind lumen and improve its adherence.

Finally we placed a foley catheter transanally under direct vision to avoid suture tension in the immediate postoperative period.

The surgery took 120 mins. The patient started oral intake 4 days after the surgery. The rectal foley  was removed after 48 hours.

Then the patient had a good outcome and no fever, with good intestinal transit tolerating a low-residual oral diet well, 10 days after surgery. CT Scan control without postoperative complications or collections at the suture 6 days after surgery.

The patient was discharged on postoperative day 7.