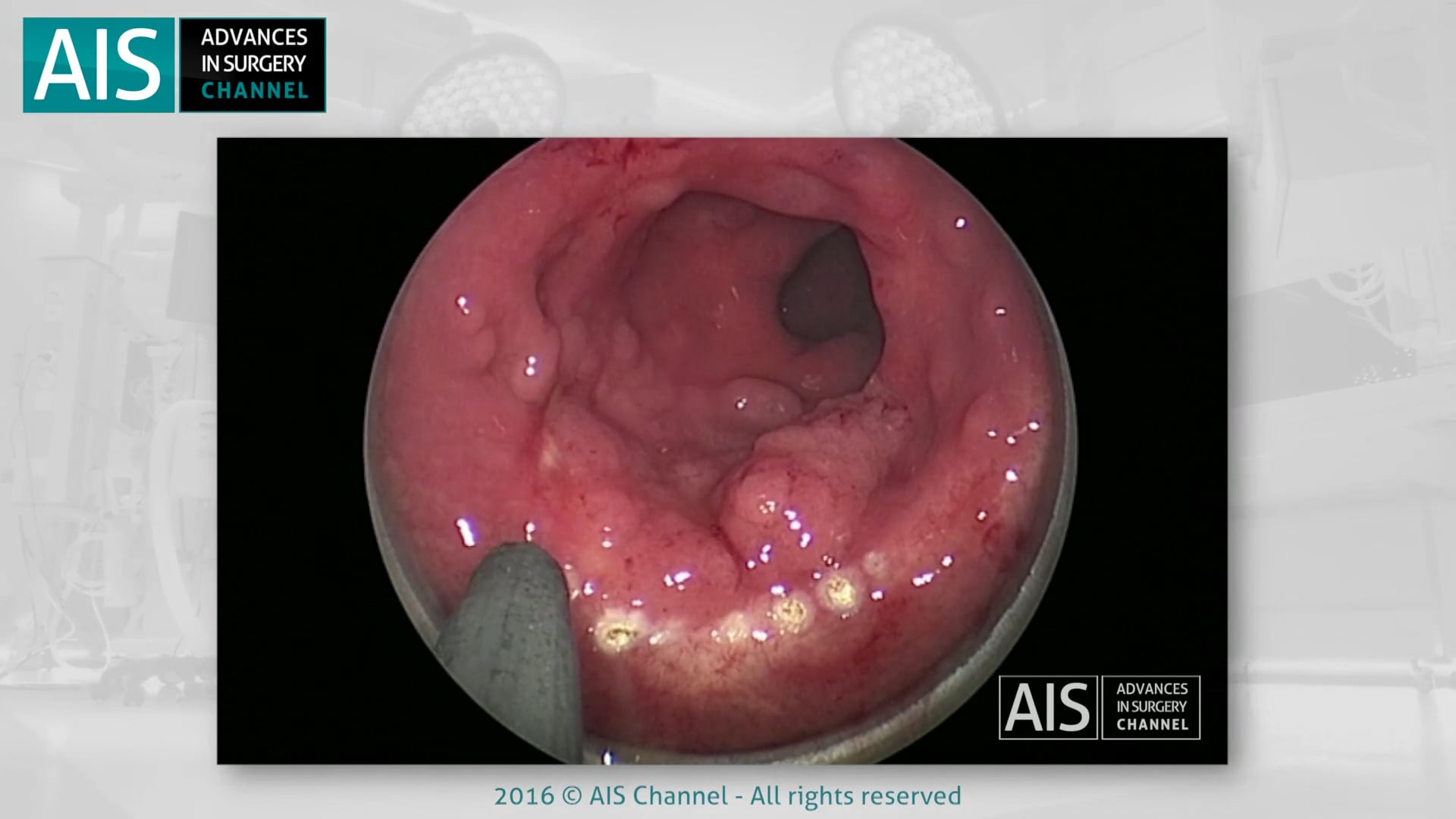 A 41-year-old male with familial adenomatous polyposis since the age of 14. The patient had declined to undergo an ileal pouch-anal anastomosis, choosing to have an open subtotal colectomy with ileo-rectosigmoid anastomosis in 2004. Approximately 20 cm of rectosigmoid colon were left in-situ. He remained on non-steroidal anti-inflammatory drugs and undergoing frequent endoscopic surveillance with removal of recurrent small rectal adenomas.Surveillance sigmoidoscopy in March 2015 demonstrated a confluent carpeting area of flat adenomatous tissue with interspersed areas of scarring, extending from 1 cm above the dentate line up to 4 cm, occupying approximately 50% of the posterior rectal wall surface. Endoscopic mucosal resection (EMR) was unsuccessful. He was planned transanal endoscopic resection of the polypoid area as patient was still refusing an ileoanal pouch.

After achieving excellent distension and visualization of the low rectum, the confluent area of a large carpeting villous adenoma was noted. The area was initially scored circumferentially with a needle-tip cautery with a 0.5 cm margin. The rectal wall dissection was first initiated distally at the level of the dentate line, where endoscopicmucosectomy was performed following the previous cautery marks. The use of a flexible-tip cautery greatly facilitated endoscopic dissection through the rigid transanal platform as it enhances the movement capability of the instruments.

The rectal wall defect was then irrigated with a saline and betadine solution. First of all a single suture was placed on the middle of the defect to begin the full thickness closure. The EndoSttitch® device was used with 2-0 vicryl stitches. Two continuous sutures from each end of the resection helped to close the rectal Wall defect. Each running suture was started laterally progressing towards the mid-point where both sutures were tied. Following air-tight closure of the rectal wall defect, hemostasis was confirmed and the platform was removed.

The OR time was 90 minutes and the patient was discharged within the same day.

Repeat flexible sigmoidoscopy 3 months postoperatively demonstrated small rectal adenomas which were easily removed, but there was no evidence of a residual carpeting adenomatous lesion.

Transanal resection of large polyps can be performed with different platforms, maintaining the same surgical principles regardless of the device used, and providing the surgeon with multiple tools to approach rectal lesions.