<-- HI/society/unexpected-cause-of-internal-hernia-after-rygbp-for-conversion-of-a-sleeve-gastrectomy/--> AIS CHANNEL - The ultimate surgical training experience!
This site uses cookies. By continuing to browse the site you are agreeing to our use of cookies. Find out more here.
Categories
Unexpected cause of internal hernia after RYGBP for conversion of a sleeve gastrectomy
Posted in Pictures on 26 November 2015
Ricard Corcelles (Gastrointestinal surgery consultant)
Ainitze Ibarzabal (Gastrointestinal surgery senior specialist)
Hospital Clínic, Barcelona – Spain

One year after the procedure the patient had lost 50kg and his BMI was 24 Kg/m2 with resolution of comorbidities.  At that time he complained of esophago gastric reflux. The upper GI endoscopy and the barium swallow revealed a hiatal hernia with a preserved mucosa and contrast reflux.

He was counseled to undergo revisional bariatric surgery and underwent a conversion into a Roux-en-Y gastric bypass. The surgery was uneventful. During the postoperative period the drainage had an increased output with slightly hematic characteristics. He remained stable with hemoglobin in 9 and tolerating liquid intake.

On the 5th postoperative day he presented with vomiting and a CT-Scan was performed (VID. 1) which found a small bowel occlusion due to an internal hernia at Petersen’s defect. No oral contrast leaks were found despite the gastro-jejunal distention.

A laparoscopic revision was carried out. Surprisingly the internal hernia had taken place in an unusual gap. In the previous surgery the alimentary limb was fixed by means of a knot to the gastric remnant to release tension and prevent the torsion of the gastro jejunal anastomosis. This knot had created a new gap and was the cause of the occlusion.

Scissors were used to remove this knot and the gut was restored to its correct position. Petersen’s defect and the anastomosis were revised.

Surgical time was 70 minutes and was uneventful. During the postoperative period the patient presented with small leak in the posterior part of the gastro jejunal anastomosis that required surgical drainage of intra abdominal collections. Antibiotics and nutritional support solved this complication. One week after, a CT Scan revealed resolution of the leak and the patient started oral intake. 12 days after the last reoperation the patient left hospital with no drainages. 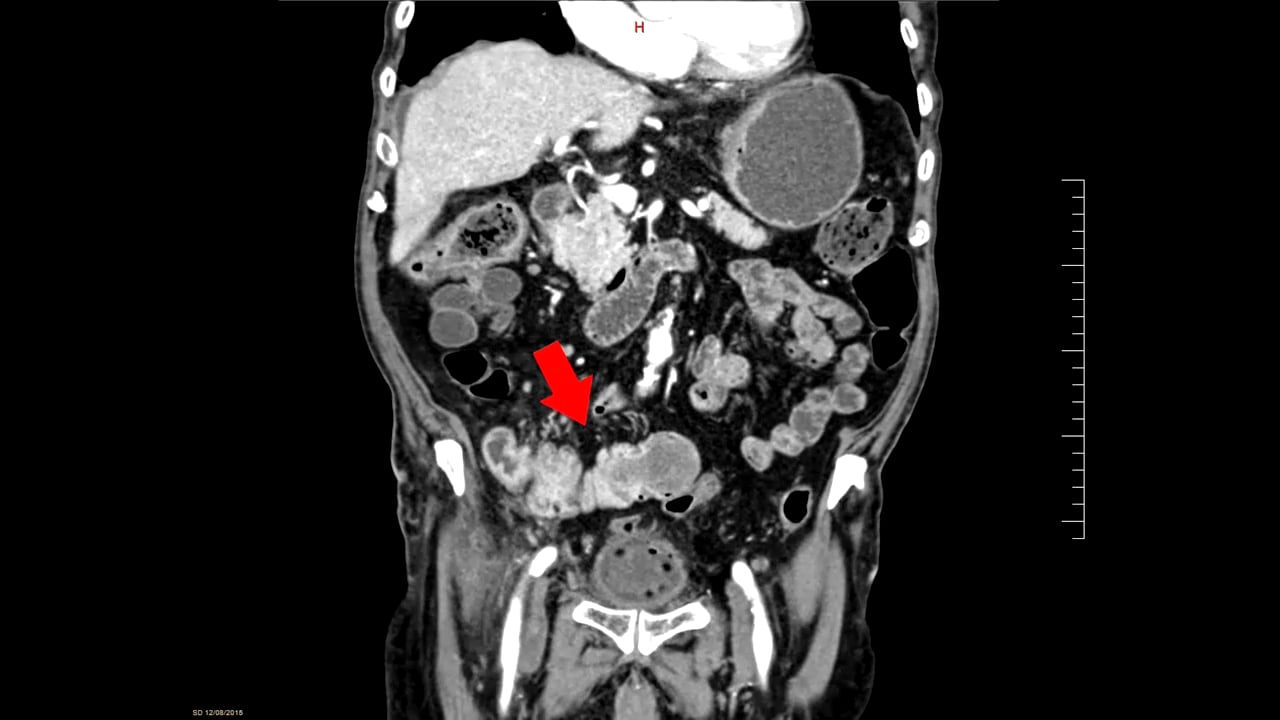