<-- HI/society/weight-regain-laparoscopic-sleeve-gastrectomy/--> AIS CHANNEL - The ultimate surgical training experience!
This site uses cookies. By continuing to browse the site you are agreeing to our use of cookies. Find out more here.
Categories
Weight regain after laparoscopic sleeve gastrectomy
Posted in Lectures on 15 February 2018 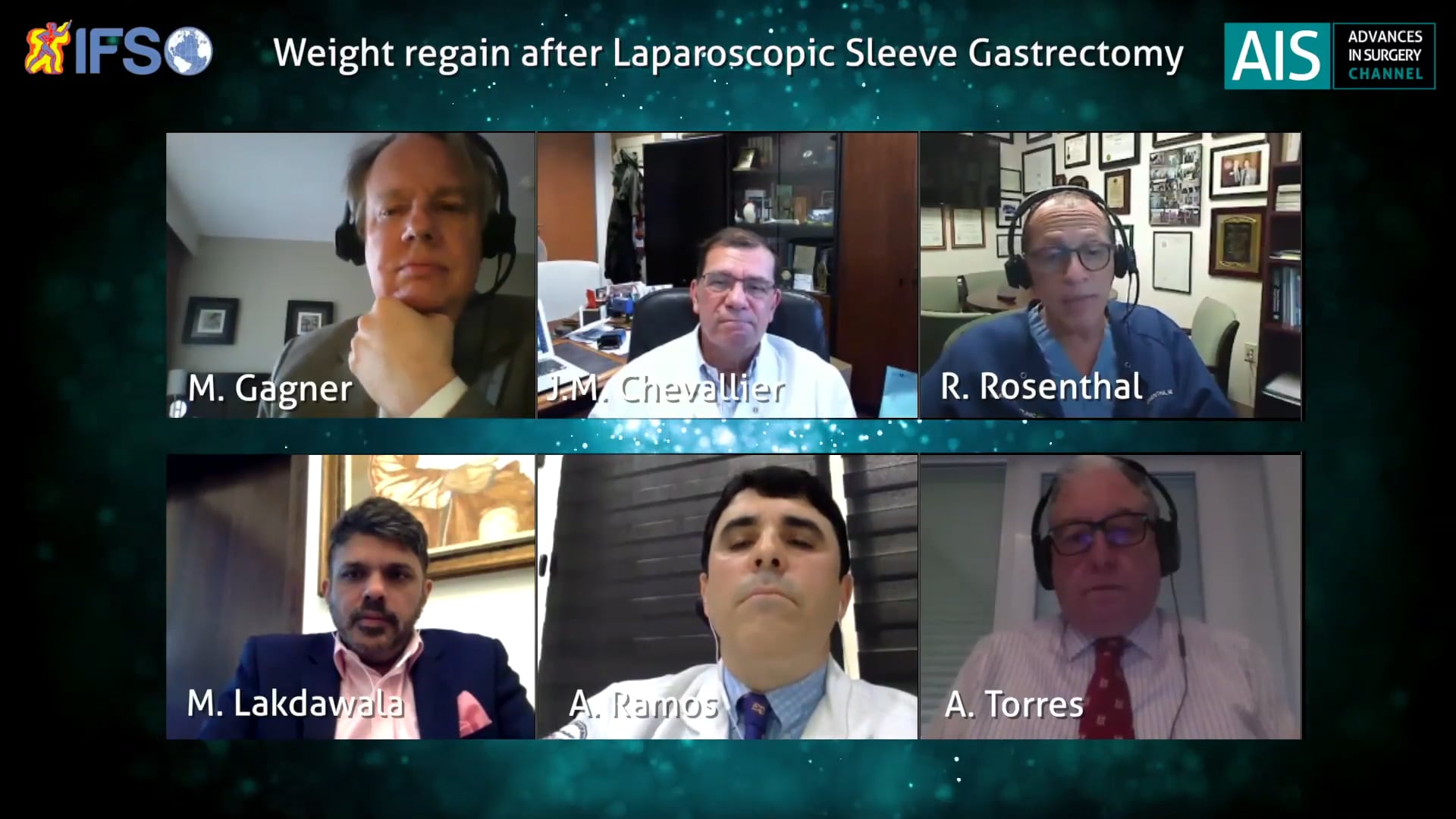 Dr. Antonio Torres, the former president of IFSO and clinical professor at the Hospital Clínico San Carlos of the Complutensian University (Madrid) gave this speech during the IV IFSO online symposium, in the virtual learning academy.

He talked about the treatment options for weight regain after laparoscopic sleeve gastrectomy (LSG).

In his experience LSG accounts for the 49% of all obesity surgical procedures, and its performance has been increasing in number worldwide.

According to the quality standards of weight loss, the percentage of excess body mass index (BMI) or weight loss (EWL) should be over 50% one year after surgery. In patients who do not meet this goal, either due to a lack of weight loss or due to weight regain, revisional surgery is proposed.

Dr. Torres focuses on the results of SADI after LSG. This surgery adds malabsorption and a greater metabolic effect, with good long-term results regarding  EWL, which according to some series is above 70% . Dr. Torres presents the results of his team, recorded from 2007 to 2017, and including 33 patients who underwent SADI after LSG.

The total revision rate due to insufficient weight loss in their experience is 9.8% of cases. The mean time to the second step is 33 months and the resulting EWL is 72%.

Regarding the metabolic evolution of these patients, 92% of previously diabetic patients are off therapy after SADI. Nevertheless, greater need for supplementation is found compared to LSG, as well as more abnormalities in the laboratory findings.

In conclusion, SADI is a safe, simple, versatile and reproducible procedure, with a low complication rate. Better results are found when performing SADI after LSG than after LRYGB. Moreover, it seems to be more physiological than the gastric bypass and has fewer side effects than the standard duodenal switch.

As Dr. Torres wonders, could it become the gold standard after a failed LSG?

After the conference Dr. Torres answered some questions and a debate took place among experienced surgeons in obesity surgery (M. Gagner, J.M. Chevallier, R. Rosenthal, M. Lakdawala, A. Ramos) to discuss technical and conceptual aspects regarding the alternatives after a failure in weight loss or a weight regain after obesity surgery.